The broad-tailed hummingbird (Selasphorus platycercus) is a medium-sized hummingbird, nearly 4 in (10 cm) in length. It is one of seven species in the genus Selasphorus.

Male and female both have iridescent green backs and crowns and a white breast. The male has a gorget (throat patch) that shines with a brilliant pink-red iridescence and a broad, predominantly black tail accented with varying amounts of green, rufous, and occasionally white. The female is much duller with pale rust-colored sides and outer tail feathers banded in rufous, green, black, and white. In flight the male's wings produce a distinct trilling sound diagnostic for this species.

The summer range of the broad-tailed hummingbird extends across mountain forests and meadows throughout the Western United States, specifically the central Rocky Mountain region and southwards; the resident birds range from the cordilleran mountain areas of northern Mexico as far south as Guatemala. At summer's end the northerly birds migrate and overwinter in the southern part of their range. This species is somewhat vagrant, especially wintering birds, and is regularly seen in El Salvador where it does not breed. They occur at altitudes ranging from 700–900 m (2,300–3,000 ft) up to 3,350 m (10,990 ft) ASL in the tropical parts of their range.

Broad-tailed hummingbirds consume the typical hummingbird diet of flower nectar and arthropods, which are taken in flight and gleaned from vegetation. Sap from trees and shrubs is used as a nectar substitute.

Nests are small cup of plant fibers woven together and bound to a branch with collected spider webs. The female lays two plain white eggs that she alone will incubate for 16 to 19 days. Young broad-tailed hummingbirds fledge about 23 days after hatching. This species is known to hybridize with other hummingbird species, including black-chinned, white-eared, and Costa's.

This species is not considered endangered; it appears to be able to adapt quite well to human-modified habitat and frequents shade coffee plantations. 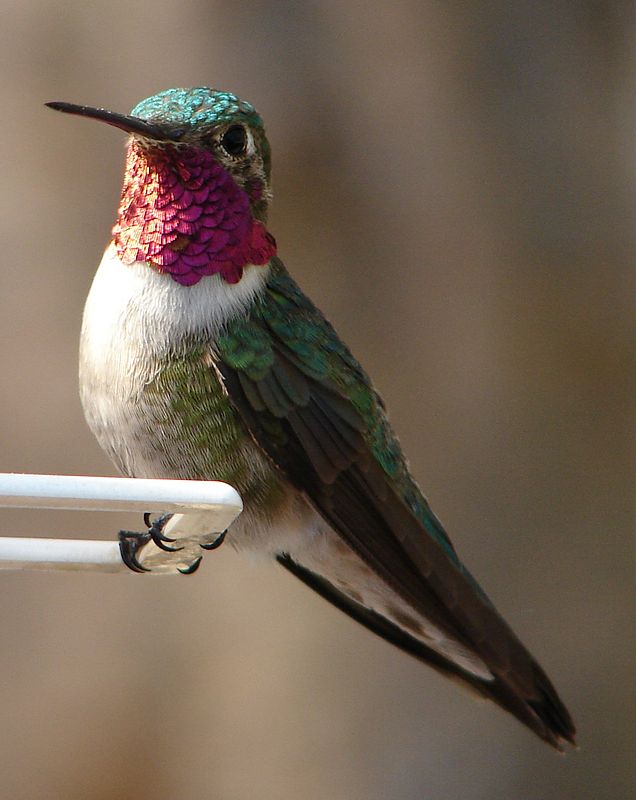