The black-headed saltator (Saltator atriceps) is a seedeating bird. Traditionally placed in the cardinal family (Cardinalidae), it actually seems to be closer to the tanagers (Thraupidae). It breeds from central Mexico to eastern Panama.

The genus Saltator is apparently polyphyletic. Whether the present species will remain in Saltator or eventually be moved to another genus remains to be seen. Somewhat similar in coloration to the buff-throated saltator, the genus' type species (which would retain the genus name), it resembles the probably well distant black-throated saltator or even the golden-billed saltator in other aspects.

This bird is on average 24 cm (9.4 in) long and weighs 85 g (3.0 oz). The adult has a slate-grey head with a whitish supercilium. The upperparts are yellowish green, the underparts are pale grey, and the throat is white edged with black. The thick convex bill is black and the legs are brown. Young birds are duller, and have mottling on the breast and brown markings on the underparts. This species is similar to the buff-throated saltator, but is larger and has a darker head and paler underparts.

The common call is a raucous deeeer. The song is a loud scratchy cher cher jur jur weeee, often given by males as a duet. 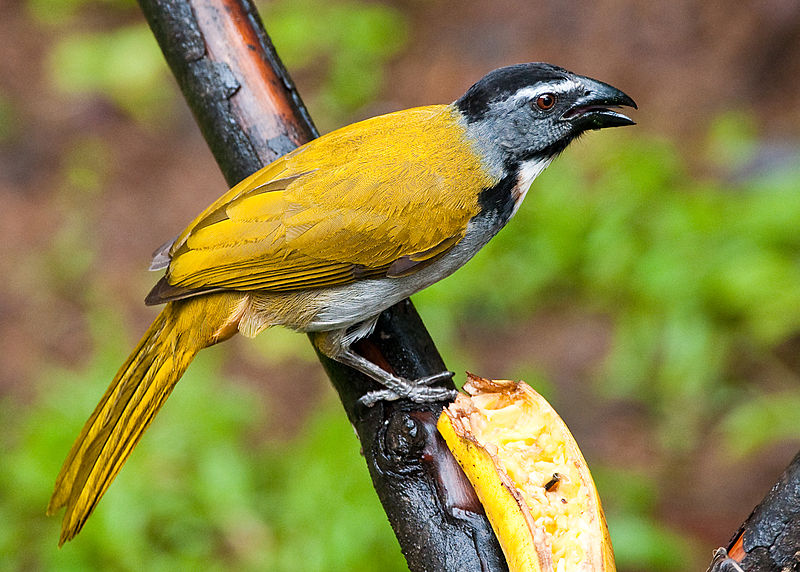