The banded martin or banded sand martin (Riparia cincta) is a small passerine bird in the swallow family.

The banded martin is found in open habitats such as farmland, grassland and savannah, usually near water. It breeds across Africa from Cameroon and Zaire to Ethiopia south to the Cape in South Africa, although it is absent from the driest regions of western South Africa and southern Namibia. The southern nominate subspecies of South Africa and Zimbabwe, is migratory, wintering further north, particularly in the west, where it can move sometimes as far as Gambia. R. c. xerica also leaves its drier breeding grounds in Botswana and northern Namibia in the southern winter. Other subspecies undertake local or altitudinal movements often dependent on the rainfall pattern.

The banded martin, unlike the other members of its genus, is not colonial in its nesting habits. Its nest is at the end of a 60–90 cm long tunnel usually excavated by the birds in a natural sand bank or earth mound. The actual nest is a litter of straw and feathers in a chamber at the end of the burrow. Two to five white eggs are the normal clutch, and are incubated by both parents.

The 15–17 cm long banded martin has earth-brown upper parts, except for a white stripe above the eye. Its underparts are white, as are the underwing coverts, and it has a dark brown breast band, and sometimes a thin dark line across the vent. Sexes are similar, but the young have a paler breast band and golden tips to the upper part feathers.

It is the largest Riparia species It is easily distinguished from the smaller sand martin by its square tail and white on the underwings, and from the brown-throated sand martin by its white throat. It is less gregarious than those species, and is typically seen in pairs or small flocks.

There are a number of subspecies differing in size and the plumage tones of the upper parts or breast band. Nominate R. c. cincla of southern Africa is the palest form.

This species has a slow erratic flight and frequently perches. Its diet consists of insects, usually taken in flight over grassland. The flight call is che-che-che, and the song is a twittering jumble of chip choop sounds. 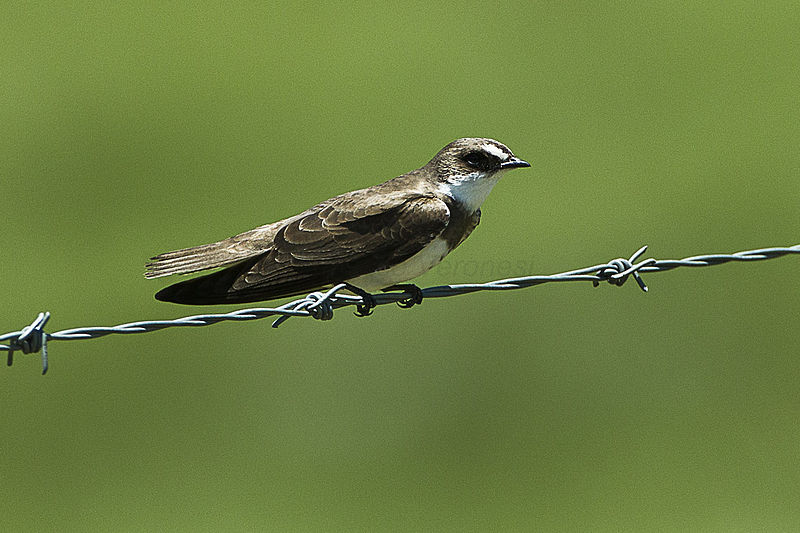