The rock martin (Ptyonoprogne fuligula) is a small passerine bird in the swallow family that is resident in central and southern Africa. It breeds mainly in the mountains, but also at lower altitudes, especially in rocky areas and around towns, and, unlike most swallows, it is often found far from water. It is 12–15 cm (4.7–5.9 in) long, with mainly brown plumage, paler-toned on the upper breast and underwing coverts, and with white "windows" on the spread tail in flight. The sexes are similar in appearance, but juveniles have pale fringes to the upperparts and flight feathers. The former northern subspecies are smaller, paler, and whiter-throated than southern African forms, and are now usually split as a separate species, the pale crag martin. The rock martin hunts along cliff faces for flying insects using a slow flight with much gliding. Its call is a soft twitter.

This martin builds a deep bowl nest on a sheltered horizontal surface, or a neat quarter-sphere against a vertical rock face or wall. The nest is constructed with mud pellets and lined with grass or feathers, and may be built on natural sites under cliff overhangs or on man-made structures such as buildings, dam walls, culverts and bridges. It is often reused for subsequent broods or in later years. This species is a solitary breeder, and is not gregarious, but small groups may breed close together in suitable locations. The two or three eggs of a typical clutch are white with brown and grey blotches, and are incubated by both adults for 16–19 days prior to hatching. Both parents then feed the chicks. Fledging takes another 22–24 days, but the young birds will return to the nest to roost for a few days after the first flight.

This small martin is caught in flight by several fast, agile falcon species, such as hobbies, and it sometimes carries parasites, but it faces no major threats. Because of its range of nearly 10 million km2 (4 million sq mi) and large, apparently stable, population, it is not seen as vulnerable and is assessed as least concern on the IUCN Red List. 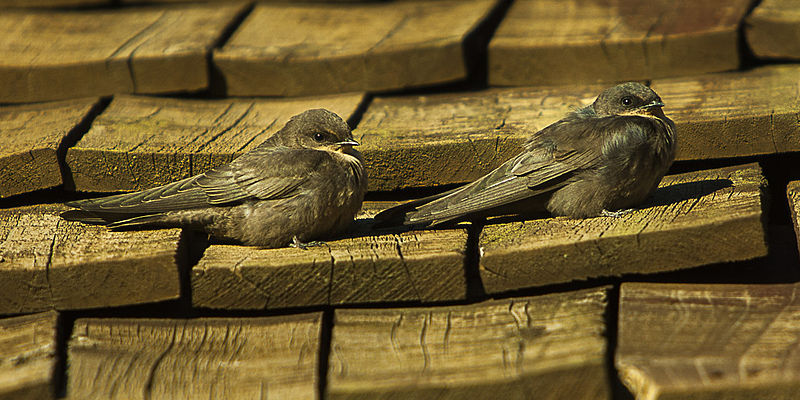