The dusky crag martin (Ptyonoprogne concolor) is a small passerine bird in the swallow family. It is about 13 cm (5 in) long with a broad body and wings, and a short square tail that has small white patches near the tips of most of its feathers. This martin has sooty-brown upperparts and slightly paler underparts. The two subspecies are resident breeding birds in South Asia from the Indian subcontinent to southwestern China and the northern parts of Thailand, Vietnam and Laos.

This martin nests under a cliff overhang or on a man-made structure, building a neat half-cup mud nest with a soft lining. Both adults incubate the two to four eggs and feed the chicks. This species does not form large breeding colonies, but it is more gregarious outside the breeding season. It feeds a wide variety of insects that are caught as the martin flies near to cliff faces. It may be hunted by large bats as well as birds of prey, but its extensive and expanding range and large population mean that there are no significant conservation concerns. 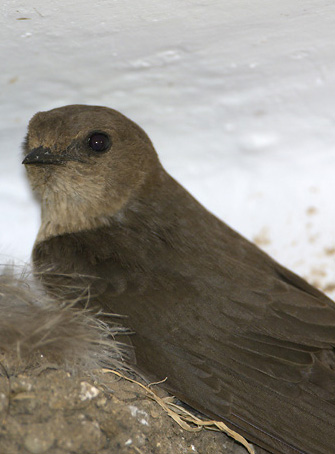