The brown-headed barbet or large green barbet (Psilopogon zeylanicus) is an Asian barbet. Barbets and toucans are a group of near passerine birds with a worldwide tropical distribution. The barbets get their name from the bristles which fringe their heavy bills.

The brown-headed barbet is a resident breeder in the Indian subcontinent, widespread in India and also seen in Bangladesh and Sri Lanka. It is an arboreal species of gardens and wooded country which eats fruit and insects. Nonetheless, it is fairly tolerant of humans and is often seen in cities, in greenery. It nests in a tree hole, laying 2-4 eggs. The bird is largely frugivorous on mangos, ripe jack, papaya, banana, figs and similar cultivated fruit trees. Its habitat includes urban and country gardens though it tends to eschew heavy forest. It nests in a suitable hole in a tree that it will often excavate out, not unlike a woodpecker. A pair will take it in turns to incubate the eggs and they often communicate with each other using their Kura, kura calls.

This is a relatively large barbet at 27 cm. It is a plump bird, with a short neck, large head and short tail.

The adult has a streaked brown head, neck and breast, with a yellow eye patch. The rest of the plumage is green. The bill is thick and red. Sexes are similar.

The white-cheeked barbet largely replaces this species in the Western Ghats and hilly parts of southern peninsular India although both species may occur in many places. The calls of this species is similar but the white cheek patch is distinctive.

The call is a repetitive kutroo…kutroo…kutroo. Others take up the call when one starts. Somewhat silent in the winter. 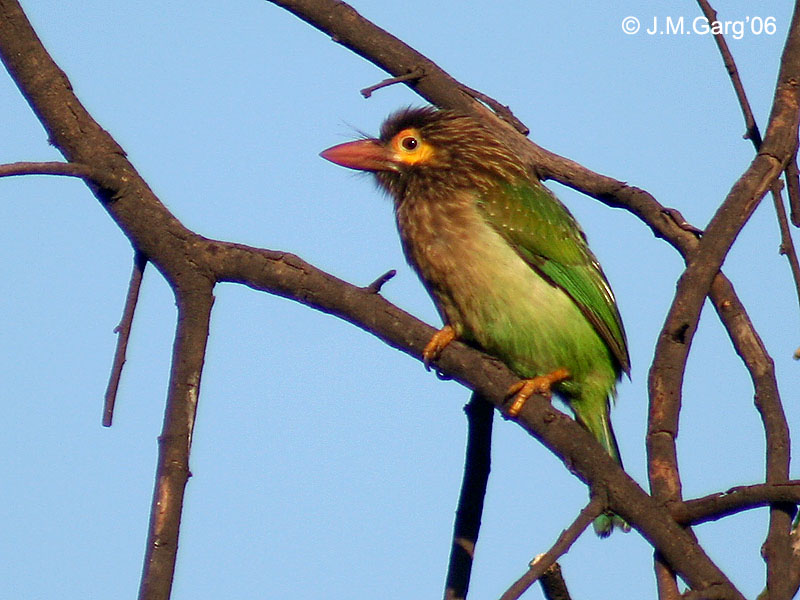