The red-fronted tinkerbird is a widespread and frequently common resident breeder in eastern South Africa, with a separate population from southern Sudan and Ethiopia south to central and eastern Tanzania. It is sometimes considered conspecific with its northern counterpart, the yellow-fronted tinkerbird, Pogoniulus chrysoconus.

The red-fronted tinkerbird is associated with juniper forest and scrub. It nests in a tree hole and lays two or three eggs. It eats berries and fruit, particularly mistletoe, but also takes insects as it forages in deep cover.

The red-fronted tinkerbird is 9–10.5 cm (3.5–4.1 in) in length. It is a plump bird, with a short neck, large head, and short tail. The adult has black upperparts heavlly streaked with yellow and white, and a golden wing patch. Its head has a strong black and white pattern, with a red forecrown spot. Its underparts and rump are lemon yellow. Sexes are similar in appearance, but young birds lack the red forehead.

This species is distinguished from the yellow-fronted tinkerbird by the colour of the forehead spot, the golden wing patch, and its overall darker appearance. It is often confused with the red-fronted barbet, but it is significantly smaller than that species, has a black moustache and a less robust bill, and lacks a broad yellow superciliary stripe. 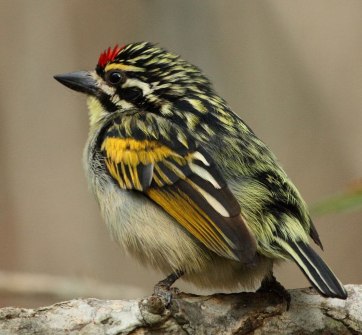