The blue-headed parrot, also known as the blue-headed pionus (Pionus menstruus) is a medium large parrot. It is about 27 cm long and they are mainly green with a blue head and neck, and red under tail feathers. It is a resident bird in tropical and subtropical South America and southern Central America, from Costa Rica, Venezuela and Trinidad south to Bolivia and Brazil. It is named for its medium-blue head and neck.

Its habitat is forest and semi-open country, including cultivated areas. It is largely restricted to humid or semi-humid regions, but locally extends into drier habitats, at least along rivers. The blue-headed parrot lays three to five white eggs in a tree cavity.

Blue-headed parrots are noisy birds and make light, high-pitched squeaking sweenk calls. They eat fruit and seeds, and sometimes grain. They roost communally in palm and other trees, and large numbers can be seen at the roost sites at dawn and dusk.

Blue-headed pionus parrots are popular as pets. Compared to other parrot species (Amazons for example) they are very quiet. They are affectionate, but not known for their talking ability. 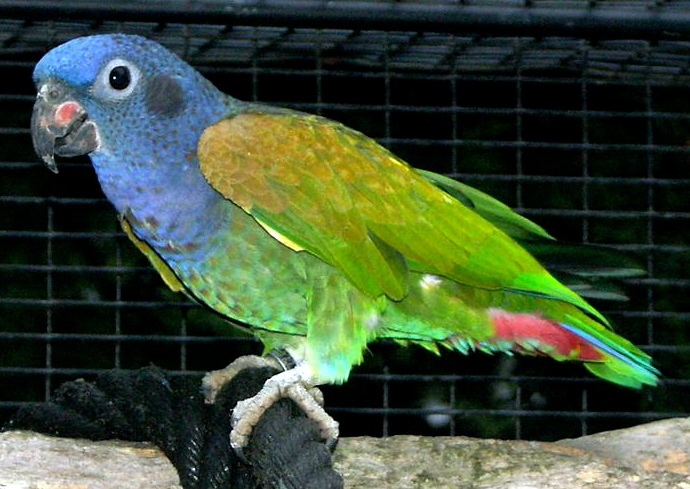