The Sind sparrow (Passer pyrrhonotus) is a passerine bird of the sparrow family Passeridae, found around the Indus valley region in South Asia. It is also known as the jungle, Sind jungle, or rufous-backed sparrow. Very similar to the related house sparrow, it is smaller and has distinguishing plumage features. As in the house sparrow, the male has brighter plumage than female and young birds, including black markings and a grey crown. Distinctively, the male has a chestnut stripe running down its head behind the eye, and the female has a darker head than other sparrow species do. Its main vocalisations are soft chirping calls that are extended into longer songs with other sounds interspersed by breeding males. Historically, this species was thought to be very closely related to the house sparrow, but its closest evolutionary affinities may lie elsewhere. Discovered around 1840, this species went undetected for several decades after its discovery.

Within its Indus valley breeding range in Pakistan and western India, the Sind sparrow is patchily distributed in riverine and wetland habitats with thorny scrub and tall grass. During the non-breeding season, some birds enter drier habitats as they disperse short distances from their breeding habitat, or migrate into western Pakistan and the extreme east of Iran. Since this species is fairly common and expanding its range, it is assessed as least concern on the IUCN Red List. The Sind sparrow is social within small groups while feeding and breeding, and during its winter dispersal. It feeds mostly on seeds and less often on insects, foraging close to the ground. Nests are made in the branches of thorny trees, and are untidy globular masses constructed from grass or other plant matter and lined with softer material. Both sexes are involved in building the nest and caring for the young, and usually raise two clutches of three to five young each breeding season. 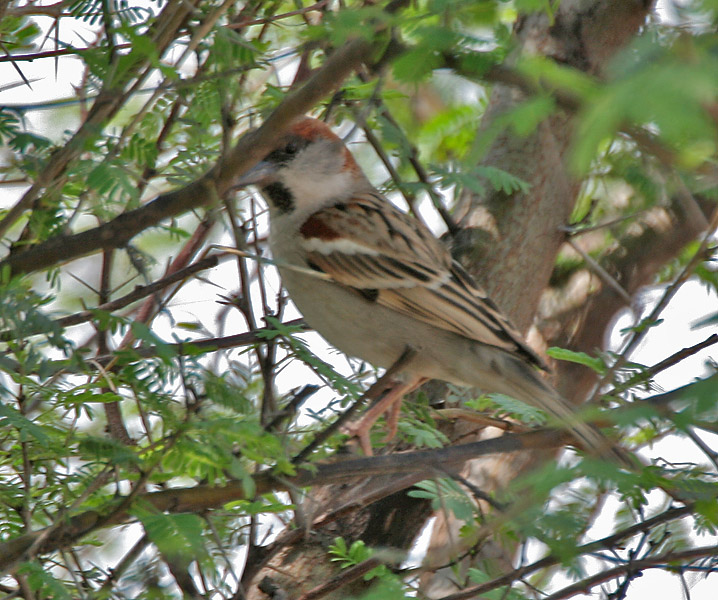