The Indian scops owl (Otus bakkamoena) is a resident species of owl found in the southern regions of Asia from eastern Arabia through the Indian Subcontinent, except the far north, east across much of Southeast Asia to Indonesia. This species formerly included what has been split out as the collared scops owl (Otus lettia). The species epithet is derived from "bakamuna", the Sinhalese name for the white barn owl (Tyto alba), and the brown fish owl (Ketupa zeylonensis).

The Indian scops owl is a common resident bird in forests and other well-wooded areas. It nests in a hole in a tree, laying 3–5 eggs.

The Indian scops owl is a small (23–25 cm) owl, although it is one of the largest of the scops owls. Like other scops owls, it has small head tufts, or ears. The upperparts are grey or brown, depending on the morph, with faint buff spotting. The underparts are buff with fine darker streaking.

The facial disc is whitish or buff, and the eyes are orange or brown. There is a buff neckband. Sexes are similar. The flight is deeply undulating.

This species is nocturnal. Through its natural camouflage, it is very difficult to see in daytime. But it can often be located by the small birds that mob it while it is roosting in a tree. It feeds mainly on insects. The call is a soft single note ("whuk?").

This species is very similar to the slightly larger partially migratory collared scops owl Otus lettia and the oriental scops owl Otus sunia. They can be separated on call and eye colour. 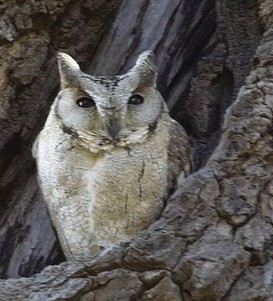