The Far Eastern curlew (Numenius madagascariensis) is a large shorebird most similar in appearance to the long-billed curlew, but slightly larger. It is mostly brown in color, differentiated from other curlews by its plain, unpatterned brown underwing. It is not only the largest curlew but probably the world's largest sandpiper, at 60–66 cm (24–26 in) in length and 110 cm (43 in) across the wings. The body is reportedly 565–1,150 g (1.246–2.535 lb), which may be equaled by the Eurasian curlew. The extremely long bill, at 12.8–20.1 cm (5.0–7.9 in) in length, rivals the bill size of the closely related long-billed curlew as the longest bill for a sandpiper.

The Far Eastern curlew spends its breeding season in northeastern Asia, including Siberia to Kamchatka, and Mongolia. Its breeding habitat is composed of marshy and swampy wetlands and lakeshores. Most individuals winter in coastal Australia, with a few heading to South Korea, Thailand, Philippines and New Zealand, where they stay at estuaries, beaches, and salt marshes. During its migration the Far Eastern curlew commonly passes the Yellow Sea.

It uses its long, decurved bill to probe for invertebrates in the mud. It may feed in solitary but it generally congregates in large flocks to migrate or roost. Its call is a sharp, clear whistle, cuuue-reee, often repeated.

As of 2006, there are an estimated 38,000 individuals in the world. Formerly classified as least concern by IUCN, it was found to have been rarer than previously believed and thus its status was updated to Vulnerable in the 2010 IUCN red list of threatened species.

In Australia its status under the EPBC Act is Critically Endangered. 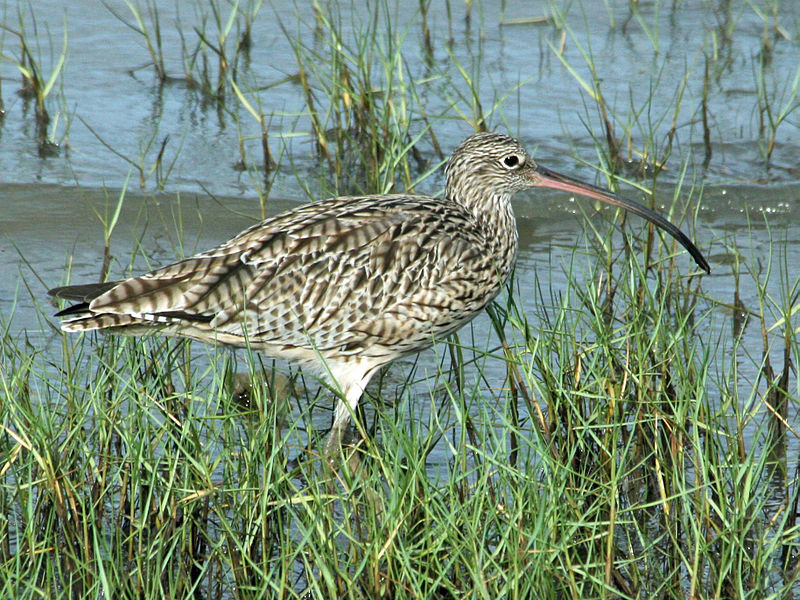