The little bee-eater (Merops pusillus) is a near passerine bird in the bee-eater family Meropidae. It is resident in much of sub-Saharan Africa. It should not be confused with the little green bee-eater, Merops orientalis. Migration is limited to seasonal movements depending on rainfall patterns.

This species, like other bee-eaters, is a richly coloured, slender bird. It has green upper parts, yellow throat, black gorget, and rich brown upper breast fading to buffish ocre on the belly. The wings are green and brown, and the beak is black. It reaches a length of 15–17 cm, which makes it the smallest African bee-eater. Sexes are alike. Often silent, their call is a soft "seep."

This is an abundant and tame bird, familiar throughout its range. There have been estimated to be between 60-80 million little bee-eaters. It breeds in open country with bushes, preferably near water. Just as the name suggests, bee-eaters predominantly eat insects, especially bees, wasps and hornets, which are caught in the air by sorties from an open perch. This species often hunts from low perches, maybe only a metre or less high. Before eating its meal, a bee-eater removes the sting by repeatedly hitting the insect on a hard surface.

Unlike most bee-eaters, these are solitary nesters, making a tunnel in sandy banks, or sometimes in the entrance to an Aardvark den. They lay 4 to 6 spherical white eggs. Both the male and the female take care of the eggs. These birds roost communally, lined up on a tree branch. 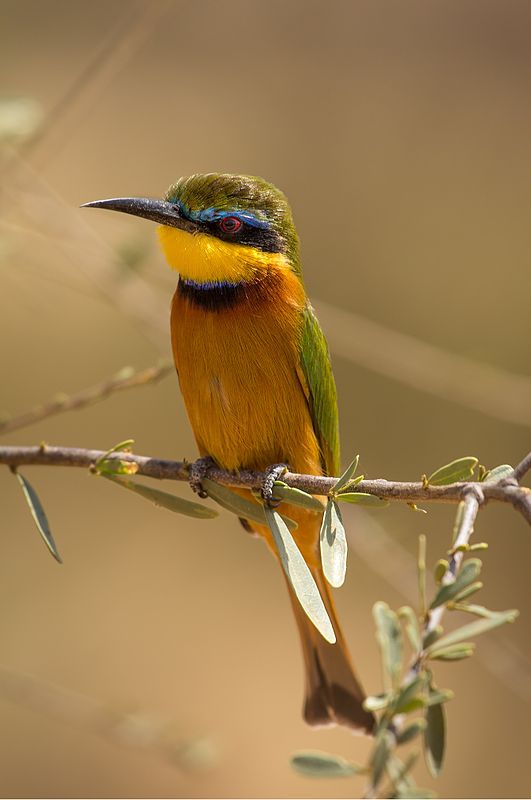