This puffbird is found in forests, shady plantations, especially of Theobroma cacao, and old second growth in lowlands and foothills up to 1200m. It nests in a 15–55 cm (6–22 in) long, 6 cm (2.4 in) diameter burrow in, usually, gently sloping ground. The wider nesting chamber is lined with dried leaves. The female lays two, rarely three, glossy white eggs. Both sexes incubate the eggs and feed the young.

The white-whiskered puffbird is a stout, large-headed, 18 cm (7 in) long bird which weighs 42 g (1.5 oz) on average. It has bristles around the base of the large bill, and white "whiskers", which are actually tufts of feathers. The adult male has pale brown upperparts and tail, with fine cinnamon spotting on the wings and crown. The underparts are cinnamon-buff, streaked darker, and becoming paler moving down the body to the almost white vent area. The female has a greyer brown back and darker streaks on the paler underparts, giving her more contrast than the male.

Young birds are like the female but have barring on the upperparts and narrower streaks on the underparts.

Like other puffbirds, this species hunts by a watch-and-wait technique, sitting motionless before darting to catch large insects, spiders, small frogs and lizards. These are taken back to the perch and beaten against it prior to consumption. Despite its size, this species is easily overlooked as it sits motionless in the foliage. 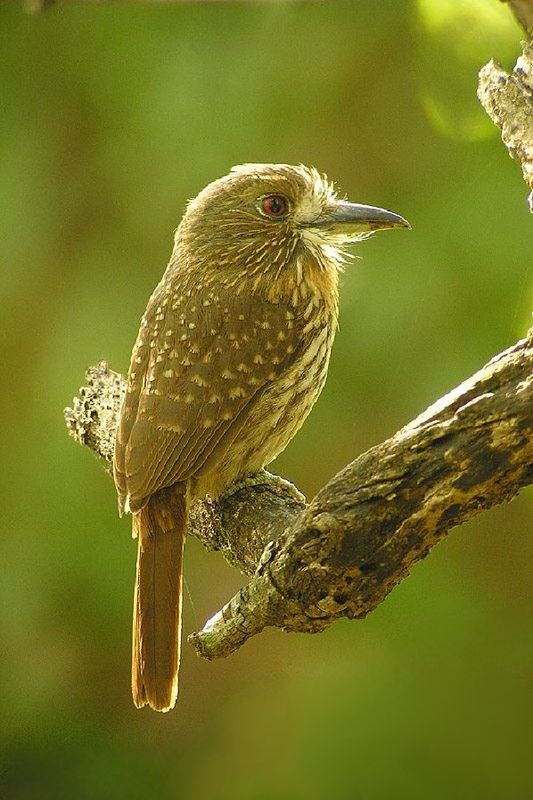