The African grey hornbill (Tockus nasutus) is a member of the hornbill family of tropical near-passerine birds found in the Old World. It is a widespread and common resident breeder in much of sub-Saharan Africa and into Arabia.

This bird prefers open woodland and savannah. The female lays two to four white eggs in a tree hollow, which is blocked off during incubation with a cement made of mud, droppings and fruit pulp. There is only one narrow aperture, just big enough for the male to transfer food to the mother and the chicks. When the chicks and female outgrow the nest, the mother breaks out and rebuilds the wall, after which both parents feed the chicks.

At 45 centimetres (18 in) in length, this is a large bird, although it is one of the smaller hornbills. It has mainly grey plumage, but the head, flight feathers and long tail are a darker shade. There is a white line down each side of the head and one on the back which is visible only in flight. The long curved bill is black and has a small casque and a creamy horizontal stripe.

The male has a black bill, whereas the female has red on the mandibles. The plumage of the male and female is similar. Immature birds are more uniformly grey. The flight is undulating. The similarly sized red-billed hornbill has uniformly grey plumage.

The African grey hornbill is omnivorous, taking insects, fruit and reptiles. It feeds mainly in trees. 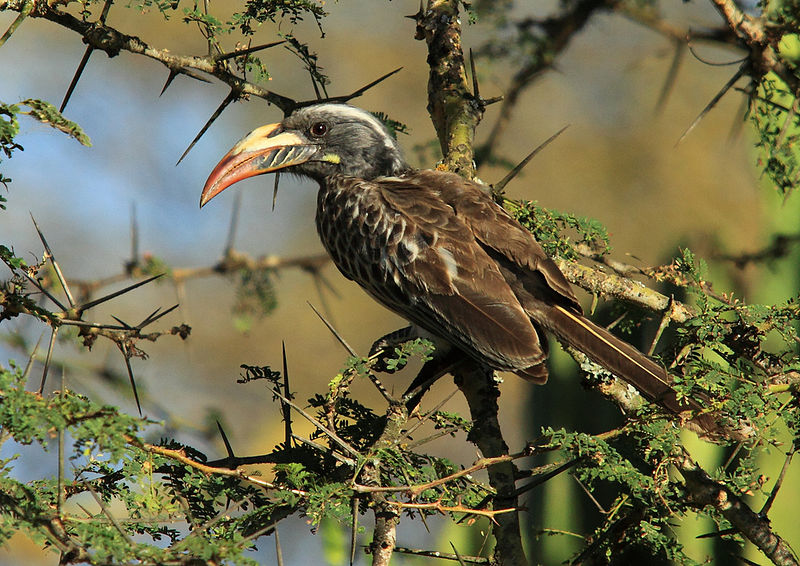