The red-throated ant tanager (Habia fuscicauda) is a medium-sized passerine bird. This species is a resident breeder on the Caribbean slopes from southeastern Mexico to eastern Panama. It was usually considered an aberrant kind of tanager and placed in the Thraupidae, but is actually closer to the cardinals (Cardinalidae). Consequently, it can be argued that referring to the members of this genus as ant tanagers is misleading, but no other common name has gained usage.

Both sexes of this species are duller and darker than the related red-crowned ant tanager which occurs on the Pacific slope in its Central American range.

It occurs in thick undergrowth at the edge of forest, second growth or abandoned plantations at altitudes from sea level to 600 m (2,000 ft). The large but untidy cup nest is usually built 1–3 m (3.3–9.8 ft) high in the fork of a shrub or tree, and is often decorated with living ferns. The normal clutch is two or three white eggs laid from April to June.

These birds are found in pairs or small groups. They eat insects, arthropods and fruit like those of Cymbopetalum mayanum (Annonaceae), and less often Trophis racemosa (Moraceae), and will follow army ant columns especially in lowlands where antbirds are uncommon. The flock will give a defensive spread-wing-and-tail display to deter potential predators.

There are six known subspecies: 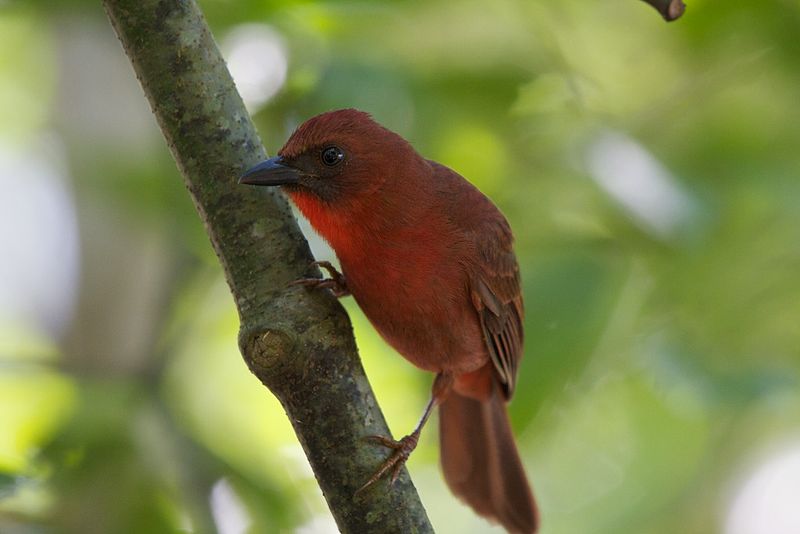