The MacGillivray's warbler (Geothlypis tolmiei) is a small species of New World warbler. These birds are sluggish and heavy warblers, preferring to spend most of their time on, or near the ground, except when singing.

The MacGillivray's warbler was named by John James Audubon in honor of Scottish ornithologist William MacGillivray, although the proper credit to its discovery goes to John Kirk Townsend. The scientific name "tolmiei" was given in honor of William Fraser Tolmie.

Adult MacGillivray's warblers will grow to be approximately 13 cm {5 to 6 inches} in length. They are an olive-green color on their upperparts and dull yellow below. Males have black heads and breasts, while females and immature birds have drab light gray heads and broken white eye-rings. MacGillivray's warblers are almost identical to their eastern counterparts, the mourning warblers, the primary difference between the two species being the mourning warbler's lack of an eye-ring.

MacGillivray's warblers are migratory and spend their summers in temperate forests in the western United States, and in boreal forests of west Canada. In autumn, these birds migrate to Central America, where they stay in temperate shrublands for the winter. 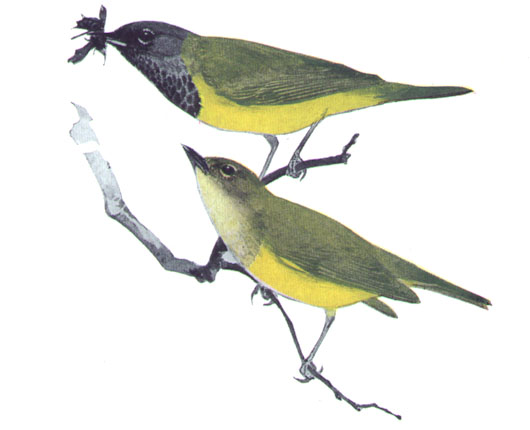