The Inca dove (Columbina inca) is a small New World dove. It ranges from the southwestern United States and Mexico through Central America to Costa Rica; the Inca dove only lives on the Pacific side of Central America. Despite being named after the Inca Empire, this species does not occur in any of the lands that constituted that region. Inca doves are common to abundant within their range and they are expanding their range north and south.

Inca doves reach a length of 16.5–23 cm (6.5–9.1 in) and weigh 30–58 g (1.1–2.0 oz). They are slender, with a gray-brown body covered in feathers that resemble a scaled pattern. The tail is long and square, edged with white feathers that may flare out in flight. In flight, the underwing is reddish, like other ground doves, and on takeoff, the wings produce a distinctive, quiet rattling noise.

This is a terrestrial species which occurs in flocks in open areas including scrub and cultivation. It will feed in urban areas, eating grass seeds and taking advantage of the ready availability of water from agricultural and suburban irrigation. The song, a forceful cooing rendered variously as "cowl-coo" or "POO-pup", may be given from a tree, wire, or other open, high perch such as a television aerial.

During winter, they roost in communal huddles in a pyramid formation that helps them conserve heat. These pyramids can contain up to 12 birds.

Inca doves live near areas of human habitation and feed in opens areas such as lawns and barnyards. They build their nests primarily in trees and shrubs. The male gathers the nesting material and presents it to the female, who also gathers some nesting material. The nest is composed of twigs, grass, and leaves and becomes reinforced with the brood's excrement. 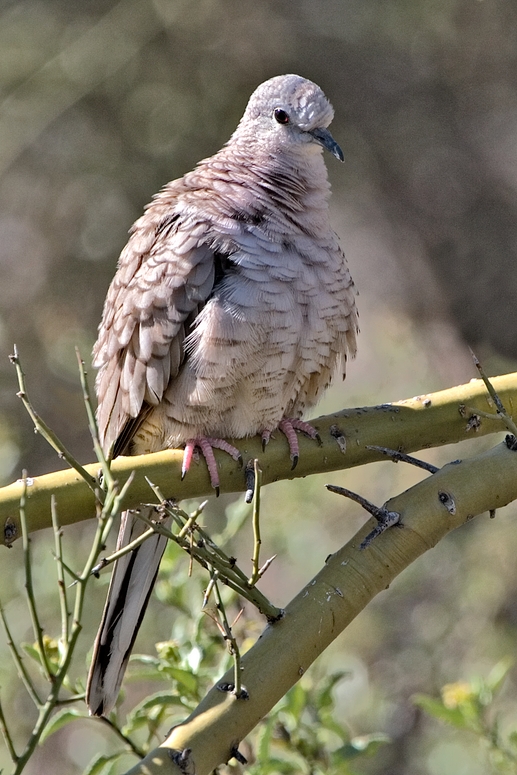