Swainson's thrush (Catharus ustulatus), also called olive-backed thrush, is a medium-sized thrush. It is a member of Catharus genus and is typical of it in terms of its subdued coloration and beautiful voice. Swainson's thrush was named after William Swainson, an English ornithologist.

The genus name Catharus comes from the Ancient Greek katharos, "pure or clean" and refers to the plumage of the orange-billed nightingale-thrush C. aurantiirostris. The specific ustuatus is Latin for "burnt", from urere, "to burn".

The breeding habitat of Swainson's thrush is coniferous woods with dense undergrowth across Canada, Alaska, and the northern United States; also, deciduous wooded areas on the Pacific coast of North America.

These birds migrate to southern Mexico and as far south as Argentina. The coastal subspecies migrate down the Pacific coast of North America and winter from Mexico to Costa Rica, whereas the continental birds migrate eastwards within North America (a substantial detour) and then travel southwards via Florida to winter from Panama to Bolivia. Swainson's thrush is a very rare vagrant to western Europe. It has also occurred as a vagrant in northeast Asia.

This species may be displaced by the hermit thrush where their ranges overlap. Possibly, the latter species adapts more readily to human encroachment upon its habitat. At least in the winter quarters, Swainson's thrush tends to keep away from areas of human construction and other activity. 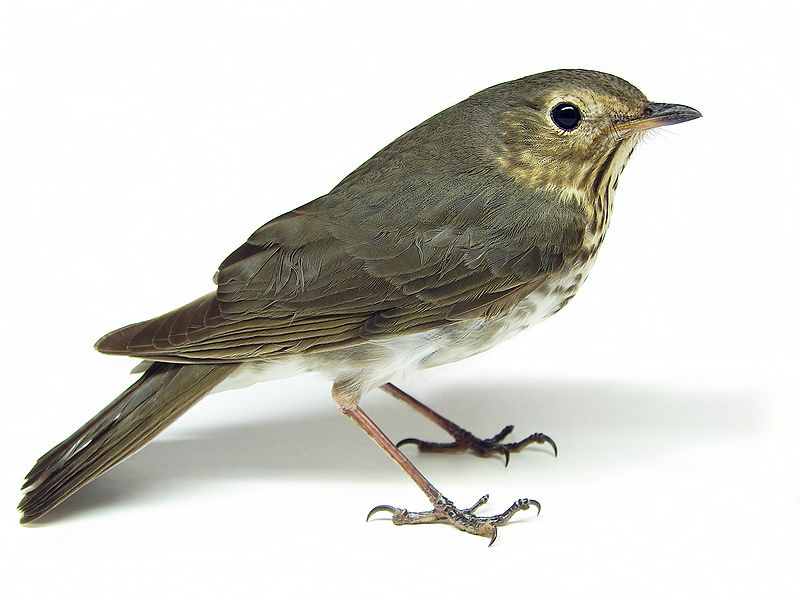