The red-faced warbler (Cardellina rubrifrons) is a species of New World warbler.

Mature red-faced warblers are small birds, 14 cm (5 1⁄2 in) long. They are light gray on top with a white rump and a white underside. The face, neck, and upper breast are all bright red, while the crown and sides of the head are black. The spot on the back of the head where the black crown and gray back meet is sometimes speckled gray, or sometimes plain white. They have a quirky habit of flicking their tail sideways while feeding.

Red-faced warblers are locally common in mountain forests of conifers and oak at 2,000 to 3,000 m (6,600 to 9,800 ft) above sea level. In summer they frequent northern Mexico and range up into the states of Arizona and New Mexico – the Madrean sky islands. In winter they migrate south into southern Mexico and the Central American nations of El Salvador, Guatemala, and Honduras. They are permanent residents of the central and southern mountains of western Mexico, the range called Sierra Madre Occidental.

The nest is a small cup constructed from leaves, grass, and pine needles. It is hidden amongst the debris on the forest floor, buried in the ground, sheltered under a shrub, log, or rock. The female lays 3 to 5 eggs, which are white spotted with brown. Incubation and nestling periods average 12 days each. 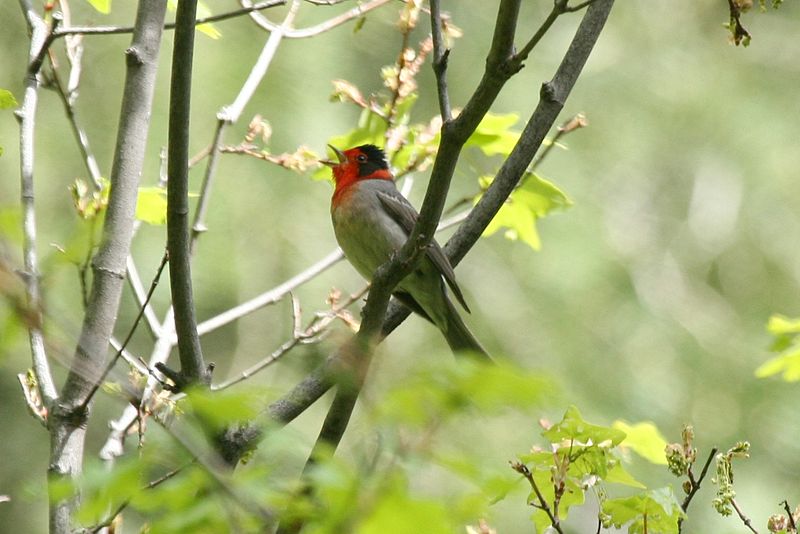