The rufous-naped wren (Campylorhynchus rufinucha) is a songbird of the Troglodytidae family, the wrens. It is a resident breeding species from central-southwest Mexico to northwestern Costa Rica.

This large wren breeds in lowlands and foothills from sea level up to 800 m (2,600 ft) altitude in forest or open woodland, scrub, second growth and savanna. It is found mainly on the Pacific side of the central mountain ranges. Its spherical nest has a side entrance and is lined with seed down. It is constructed 1.5 to 8 m (4.9–26.2 ft) high in thorny trees or shrubs, especially bull’s-horn acacia. This species sometimes nests close to the nests of wasps and there is experimental evidence that those that do so are afforded substantial protection from predation by doing so.

The female alone incubates the three to five brown- or black-spotted white eggs for about two weeks until hatching, and the young fledge after about the same length of time again. After breeding, families sleep together in dormitory nests like those used for breeding.

The adult rufous-naped wren is 17 cm (6.7 in) long and weighs 36 g (1.3 oz). It has a black crown and eyestripe separated by a strong white supercilium, a rufous nape, and cinnamon-brown upperparts streaked with black and white, especially on the rump. The wings and tail are barred with black and greyish-white. The underparts are white. Young birds have duller upperparts and buff underparts.

This species has a short rasping call. The song is a mix of rich whistles, chatters and gurgles often given as a duet.

The rufous-naped wren forages actively in low vegetation in pairs or family groups. It eats mainly insects, spiders and other invertebrates. This species is often tame and inquisitive. 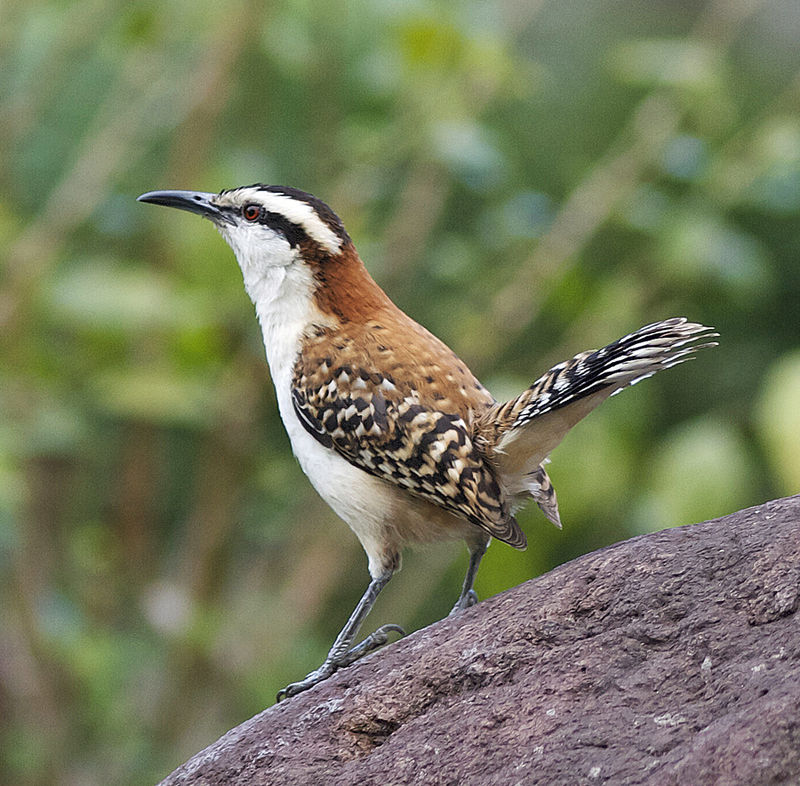