The violet sabrewing (Campylopterus hemileucurus) is a very large hummingbird native to southern Mexico and Central America as far south as Costa Rica and western Panama.

It is a species of the understory and edges of mountain forests, especially near streams. The female violet sabrewing lays two white eggs in a relatively large cup nest on a low horizontal branch, usually over a stream.

The violet sabrewing is 15 cm (5.9 in) long; the male weighs 11.5 g (0.41 oz) and the female 9.5 g (0.34 oz). It is the largest hummingbird found outside of South America and the largest sabrewing. The adult male is deep violet, with a dark green back and wing coverts. The shafts of the male’s outer primary flight feathers are thickened and flattened to give the distinctive feature which gives the sabrewings their English and scientific names. The three outer pairs of feathers of the otherwise black tail are white; this gives rise to the scientific species name, hemileucurus translating as "half-white tail", but several other sabrewings share the tail pattern, not least the white-tailed sabrewing of Venezuela and Tobago.

The female is dark green above and grey below apart from a violet throat; the tail pattern is the same as the male's. Young violet sabrewings have buff edges to the feathers and lack any violet, although juvenile males may be dusky green-blue below.

The food of this species is nectar, taken mainly from undergrowth flowers with Heliconias and bananas as favourites. The males are less aggressive and territorial at flowers than their size would suggest.

The call of the violet sabrewing is a sharp twitter, and the song of the male, given at leks of up to ten males, is a high-pitched piercing cheep tsew cheep tik-tik tsew. 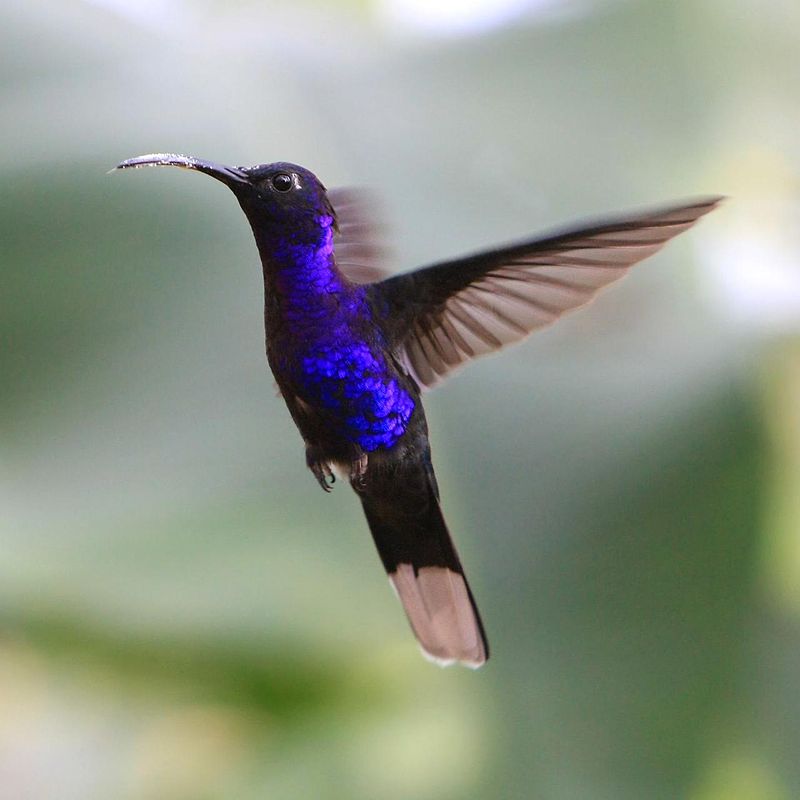