The yellow-tailed black cockatoo (Calyptorhynchus funereus) is a large cockatoo native to the south-east of Australia measuring 55–65 cm (22–26 in) in length. It has a short crest on the top of its head. Its plumage is mostly brownish black and it has prominent yellow cheek patches and a yellow tail band. The body feathers are edged with yellow giving a scalloped appearance. The adult male has a black beak and pinkish-red eye-rings, and the female has a bone-coloured beak and grey eye-rings. In flight, yellow-tailed black cockatoos flap deeply and slowly, and with a peculiar heavy fluid motion. Their loud eerie wailing calls carry for long distances.

The yellow-tailed black cockatoo is found in forested regions from south and central eastern Queensland to southeastern South Australia including a very small population persisting in the Eyre Peninsula. Two subspecies are recognised, although Tasmanian and southern mainland populations of the southern subspecies xanthanotus may be distinct enough from each other to bring the total to three. Birds of subspecies funereus (Queensland to eastern Victoria) have longer wings and tails and darker plumage overall, while those of xanthanotus (western Victoria, South Australia and Tasmania) have more prominent scalloping.

Unlike other cockatoos, a large proportion of the yellow-tailed black cockatoo's diet is made up of wood-boring grubs, and they also eat seeds. They nest in hollows situated high in trees with fairly large diameters, generally Eucalyptus. Although, they remain common throughout much of their range, fragmentation of habitat and loss of large trees suitable for nesting has caused a population decline in Victoria and South Australia. In some places yellow-tailed black cockatoos appear to have adapted to humans and they can often be seen in parts of urban Sydney and Melbourne. It is not commonly seen in aviculture, especially outside Australia. Like most parrots, it is protected by CITES, an international agreement, that makes trade, export, and import of listed wild-caught species illegal. 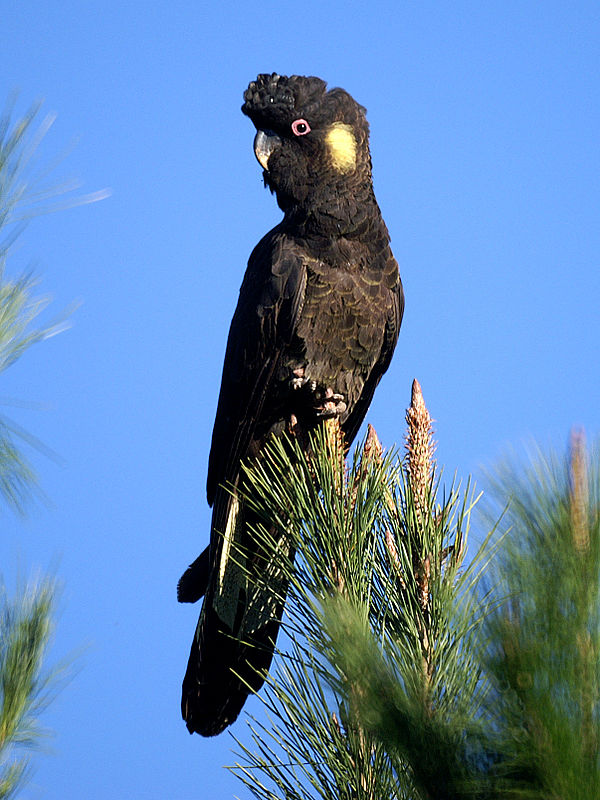