The rufous-capped warbler (Basileuterus rufifrons) is a New World warbler native from Mexico south to much of Central America, rarely occurring as far north as southeastern Arizona and south Texas.

Rufous-capped warblers generally reach a length of about 12.7 cm (5.0 in). They are plain-olive to olive-gray, with white underbellies, bright yellow chests and throats, and a distinctive facial pattern consisting of a rufous cap, a white eyebrow-line (or superciliary), a dark eye-line fading into a rufous cheek, and a white malar marking. The bill is rather stout for a warbler, the wings are round and stubby, and the tail is long, often raised at a high angle and flicked.

While rufous-capped warblers are generally birds of tropical shrubby highlands, North American sightings tend to be in oak woodland canyon bottoms, near running water, while the birds stay low in dense vegetation.

The courtship song of the rufous-capped warbler is a rapid, accelerating series of chipping notes (chit-chit-chit-chitchitchit), somewhat reminiscent of the rufous-crowned sparrow, while the call notes is a hard chik or tsik, often repeated. Like other New World warblers, this species does not actually warble.

Rufous-capped warblers primarily feed on insects and spiders, foraging through dense brush and scanning close to the ground for movement. They are not generally known to flycatch from perches.

Birds in the southern part of the range are by some authors split out as a separate species, chestnut-capped warbler (Basileuterus delattrii). 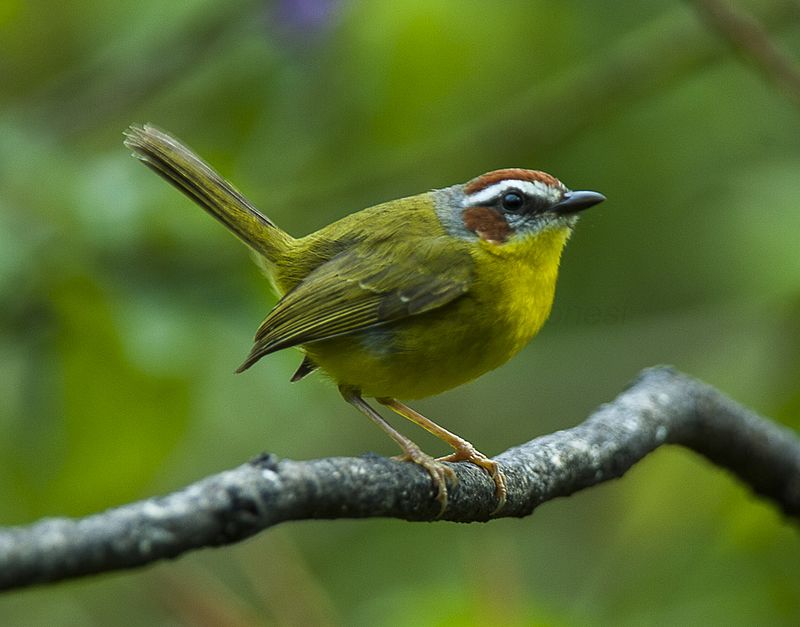